As you observe others, if there is anything you learn, it will be that everyone is different.  We apply knowledge at a different pace, mostly because of our personal preferences, and we perform our approach in a unique way.  Learning and applying each lesson takes time and effort.  The more resistant someone we are to changing our style, the longer we will be rewarded with poor performance.

To ensure we start off with factual information we can make appropriate choices in how to bowl better, let’s consider some basic facts.

You can do everything perfectly during your approach, but if your release does not translate into an effective result, your efforts turn into disaster.

If you are willing to work toward improve your bowling skills, you need to develop beyond the simple “point and throw” method of releasing the ball.  The answer is to learn more about each component of how you release the ball.  We begin with the Axis of Rotation and Axis Tilt of the ball.  These are important components of how the ball is released, and how the ball reacts as it travels down the lane.

Identifying your ball’s axis of rotation and tilt when you release the ball, and learning how to control them, will help in adjust your bowling technique.

What is the Axis of Rotation?

Axis rotation is the difference between the direction the ball is rotating and the direction that it is moving down the lane.  The axis of rotation is determined by the horizontal angle of your fingers (how far around the side of the ball your fingers are) as you release the ball. From your perspective, the axis of rotation at the release allows you to control the amount of skid and the strength of the back end reaction. The higher the axis rotation is at the release point, the longer the ball will skid down the lane and the stronger the reaction will be on the back end.

Examples of Axis of Rotation

The tires on a railroad car or an automobile rotate around an axle.  The axle, then is the axis of rotation of the wheel. 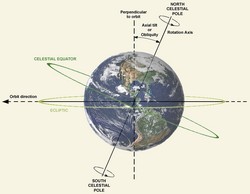 Similarly, the earth circles the sun in a set path, but the earth rotates about an axis that is tilted.  That is the reason for the annual seasons we enjoy during the year-long trip around the sun.

A bowling ball, as it rolls down the lane in a set path toward the pins, can be made to rotate about an axis.  This then is the axis of rotation of your ball.  The Axis of Rotation of a bowling ball is the horizontal angle, or plane that the bowling ball is rotating around.  As the ball is released, it rotates around this axis, and the axis is defined by points on the ball called the Positive Axis Point (PAP) and Negative Axis Point (NAP).  The PAP faces toward the ball-side channel, and the NAP faces toward the center of the lane.

Axis Rotation and Ball Travel Recalling the three phases of ball transitioning, Skid, Hook and Roll, during the skid phase, the ball’s axis of rotation remains relatively constant.  If you were to place a piece of white tape on the PAP, as the ball travels down the lane, the tape would appear to remain stable.  As the ball enters the hook phase of its travel down the lane, the direction the ball starts to change as the ball to lane friction increases.  The tape would move to the left for a right-hander and right for a left hander.  In other words, the axis of rotation migrates toward the Positive Spin Axis (PSA), the axis around the heaviest part of the ball. The ball to lane friction causes the rotation of the ball to start moving toward the pocket.  Once the axis migrates from the PAP to the PSA, the ball enters the roll phase of the ball travel, and the axis of rotation is zero degrees (0°).  The ball is traveling in the same direction it is rotating. Using the Axis Rotation

Many bowlers release the ball with a very high axis rotation, near 90 degrees.  While this release provides maximum back-end hook, it may not be appropriate for all conditions.  An aggressive release may cause the bowler to overplay the lanes with a high axis rotation.  This is especially the case as the lanes dry over the course of the game.  You need to adjust adequately to be successful as the lanes transition or on longer, heavier and flatter patterns if you are to advance your skills.

A zero degree (0°) axis rotation release is most appropriate for spare shooting.  This hand position allows a bowler to throw nearly straight on any lane condition.

This hand position provides the straightest rolling trajectory, and minimal hook. With a 0°release, the fingers are placed at 6 o’clock at the release.  The hand is placed directly behind the ball.  This creates end-over-end roll.  While ball characteristics may cause the ball to hook, this hand position at release minimizes ball hook.

To enhance the effect of this release, you should place your fingers directly behind and under the ball with your index finger tight against your middle finger and your pinky finger spread out to the side.

To enhance this release, break your wrist back and downward slightly as well (Breaking the wrist is a relaxed wrist position that allows you to release the ball with minimal spin. Breaking the wrist is also helpful when bowling on dry lanes or wherever ball-spin would result in too much of a hook, and of course, spare shooting).  As you throw the ball, make an effort to lead the pinky toward the target. Breaking your wrist downward and leading with your pinky assists in preventing the rotation of your wrist and better ensures achieving zero degrees (0°) of axis rotation.

When the PAP faces directly toward the channel, the ball is rotating around what is considered as zero degrees axis rotation.

45 degrees – medium roll with a medium back end hook

The mid point between these two points is considered as 45 degrees axis rotation.

With a release in the 45-degree (45°) range, you will obtain an earlier roll with a medium back end reaction. This release is appropriate as a medium length oil pattern, and should be a good starting position.

To enhance the affect of this release, your pinky finger should be placed next to your ring finger, and your index finger spread out to the side.  Your wrist position should remain firm, and lead with your middle finger pointed toward the target on release.

A 90-degree (90°) release, your fingers will point toward the channel.  The ball will turn early with the maximum back end reaction.  This ideal for long length and heavy oil patterns.

To enhance the effect of this hand position, place your pinky next to your ring finger, and spread your index finger outward.  Be certain to maintain a straight, firm wrist, and lead with your index finger pointed toward the target.

If the PAP directly faces the pins, it is considered 90 degrees axis rotation.

Fast is fine, but accuracy is everything